Salt is a powerful magickal tool and ingredient. As a tool, it is often used to cast a circle as it creates a powerful barrier that shields and protects you while you are working magick, a time during which a witch is both at her/his most powerful and at his/her most vulnerable. As an ingredient, salt is used in banishing, binding, cleansing, grounding, healing, purification, and protection magick, as well as for blessings and consecrations. Mined salt may be used to represent the element of earth on an altar.  Also, different types of salt may have additional magickal properties and as such, one salt may be more suited to the particular magick you are working than another.

Salt is a mineral comprised mainly of sodium chloride. It comes from salt mines or as a result of the evaporation of seawater or other saltwater. Although salt is used to season foods, it isn’t an herb or a spice as it doesn’t come from a plant. Also, unlike herbs and spices, it doesn’t add any of flavour to foods but rather it enhances existing flavours. In addition to culinary applications, other uses for salt include food preservation and home remedies.

Salt has an unlimited shelf life but it does need to be stored properly to keep it from clumping. As such, it is best to store your salts in airtight containers such as glass Mason jars or in salt boxes, also called salt cellars or salt pigs.

Manufacturers usually add iodine, a chemical element, to common table salt to prevent deficiencies in human beings. They also typically add anti-caking compounds to keep the salt from clumping so that it flows freely from a shaker. Both iodine and anti-caking compounds may slightly affect salt’s magickal properties. Therefore, for magickal purposes, it’s ideal to use salt that does not have either one added to it whenever possible.

Water softener salt, road salt, rock salt, and the like should not be used for magickal purposes. Only culinary-grade salts should be used in spellwork, including in the crafting of blended salts. 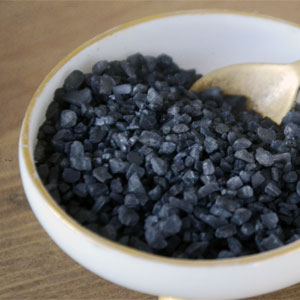 : Also called Hawaiian lava sea salt, it is a blend of sea salt and activated volcanic charcoal. Black lava salt is very effective at keeping undesirable people, influences, and negativity from your home or office as well as dispelling negative energies and spirits.

: Also called table salt, this is salt that has been mined from rock salt deposits in the earth. As indicated, it is used in banishing, cleansing and protection magick as well as for circle casting. If you are using supermarket common salt, make certain that it does not have added iodine or anti-caking compounds.

: This is common salt that has crystals that are star-shaped (dendritic) rather than cubed. As a result, it dissolves more rapidly and more thoroughly than salts with different shaped crystals. This is quite useful for magick that requires the dissolution of the salt in water or other liquid. Otherwise, it has the same magickal properties as regular white salt.

: While it can occur naturally, this salt is usually produced by the way sea or ocean water evaporates in salt pans. Although it will dissolve more quickly than grain salt, it has the same magickal properties as any other sea salt. 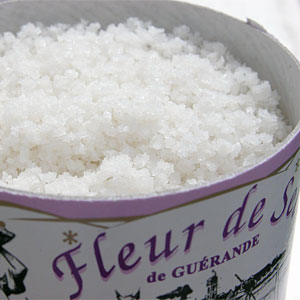 : Also called flor de sal or flower sea salt. This salt forms from the first most fragile salt crust at the top of the sea water as it evaporates and is typically harvested by hand. It is quite expensive compared to most other sea salt but is more potent magickally. While it has the same magickal properties as sea salt, fleur de sel has more power when compared to an equivalent amount of any other sea salt. It is also very effectual in blessing, clearing, cleansing, consecration and purification magick.

: This is the traditional salt of the Hawaiian islands. It is harvested from Pacific waters using traditional methods of solar evaporation, which allows the salt crystals to form with Hawaiian volcanic clay called alae, giving it a bold red colour. In addition to the magickal properties of sea salt, Hawaiian red alaea sea salt is especially effective in libido, lust, passion, romantic love, and sexual stamina spells as well as in aphrodisiacs.

: Also called red rock salt, this salt is mined from the foothills of the Himalayans in Pakistan. It gets its pink colouring from minerals and trace elements, particularly iron. Himalayan pink salt is used in family, friendship, heartbreak,  love, and romance magick. 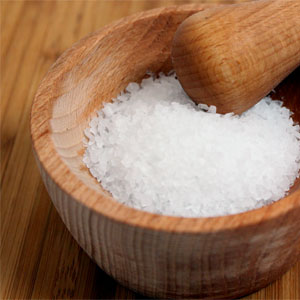 : This is common salt that has no added iodine or anti-caking agents. It is typically very fine-grained so as to make it dissolve faster in water to make brine. Its magickal properties are the same as any other non-iodized common salt.

: Also called solar salt, sel de mer, or sale marino, this is salt that is derived by the evaporation of seawater. In addition to the magickal properties of common salt, sea salt is used to cleanse tools and crystals as well as in rebirthing, renewal, and reversal magick. It is also known for increasing prosperity and success.

: This is grey salt that comes from the Atlantic coast of France, primarily in the Brittany region. The colour comes from trace minerals absorbed from salt pond clay. Sel gris is effective in balance, binding, curse-breaking, and grounding magick. 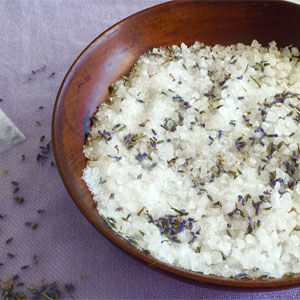 : This is a potent blend of sea salt and dried lavender that is mainly used in psychological healing and protection magick. It is particularly effective at stopping a psychic attack. Lavender salt is also used to cleanse crystals of negative energy. You can buy it from metaphysical shops but crafting your own Lavender Salt will infuse it with your own magick, making it even more effective in your spellwork. Craft your own Lavender Salt.

: Also called Sal Negro as well as simply Black Salt or Witch’s Salt. This is a magickal salt that is a combination of sea salt and fine ashes collected from the remnants of a ritual fire or a sacred fire. This salt is mainly used in banishing, binding, dispelling, and protection magick and is considered to be the most powerful salt for these purposes. You can buy it from metaphysical shops but crafting your own Witch’s Black Salt will infuse it with your own magick, making it even more effective in your spellwork. This type of black salt is not edible and should not be confused with culinary black lava salt or other comestible black salts. Craft your own Witch’s Black Salt.

: This is typically common salt or sea salt that has been blessed by Anglican or Roman Catholic member of the clergy, usually a priest, imbuing it with the energy of God. It is most commonly attributed to Christian religions, although some other religions may have their own versions. It can be acquired online or you can ask an Anglican or Roman Catholic priest to bless some salt for you. Blessed Salt may be used in banishing, binding, dispelling, healing, and protection magick as well as exorcisms. 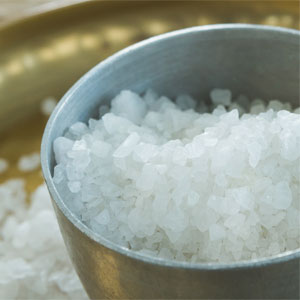 : This is salt that has been extracted from the Dead Sea. It has a different mineral composition than other salts as it has about 1/3 of the sodium chloride of white salt and is rich in other minerals including calcium, magnesium, and potassium. It is not considered edible nor is it used in culinary applications. It does not have the same magickal properties of regular sodium chloride salt and as such, it shouldn’t be used in place of any of the other salts listed above. Dead Sea salt typically is used in banishing, purification and protection spells as well as in healing and soothing magick.

:  Although included on this page, Epsom salts is not comprised of sodium chloride nor is it even an actual salt. Rather, it is hydrated magnesium sulfate, another mineral, and is not used for culinary purposes. It does not have the magickal properties of regular sodium chloride salt and as such, shouldn’t be used in place of any of the other salts listed above. In magick, Epsom salts are typically used in magick baths and floor washes. Its magickal properties include: calming; curse-breaking; dispelling, especially negative energies; purification; soothing.

: Although included on this page, green salt is not an actual salt. Rather, it is a culinary grade product made from ground dehydrated Salicornia, a plant commonly known as glasswort, saltwort, or sea asparagus. This plant commonly grows on beach or in salt marshes. This explains it’s sodium content, which is less than half the amount as common salt. As such, it does not have the same magickal properties of regular sodium chloride salt and so, it shouldn’t be used in place of any of the other salts listed above. Rather, it would be used in the same manner as a dried herb. Its magickal properties include: abundance; good luck; money; prosperity; wealth. Pairing it with basil will amplify its magickal properties.